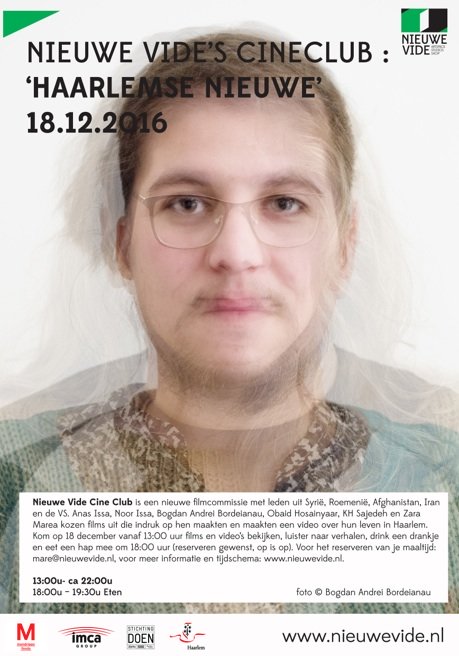 The Nieuwe Vide Cineclub was a film committee with members from Syria, Romania, Afghanistan, Iran and the United States who all live in Haarlem now. They were brought together by curator Mare van Koningsveld, who came up with the idea for this club.

Anas Issa, Noor Issa, Bogdan Andrei Bordeianu, Obaid Hosainyaar, KH Sajedeh and Zara Marea are part of the club. The past few weeks they came together, have chosen films and were asked by Van Koningsveld to make videos themselves as well, about their life in Haarlem. On the 18th of December, they showed their videos and the films they’ve selected in Nieuwe Vide. Artist Polina Medvedeva and curator Katayoun Arian joined us for our ‘Table Talks’. There also was a good meal and drinks for a small donation. The donations will be given to No Border Kitchen (Lesbos).